This Riddler puzzle is about arranging pool balls using a robot!

You own a start-up, RoboRackers™, that makes robots that can rack pool balls. To operate the robot, you give it a template, such as the one shown below. (The template only recognizes the differences among stripes, solids and the eight ball. None of the other numbers matters.) 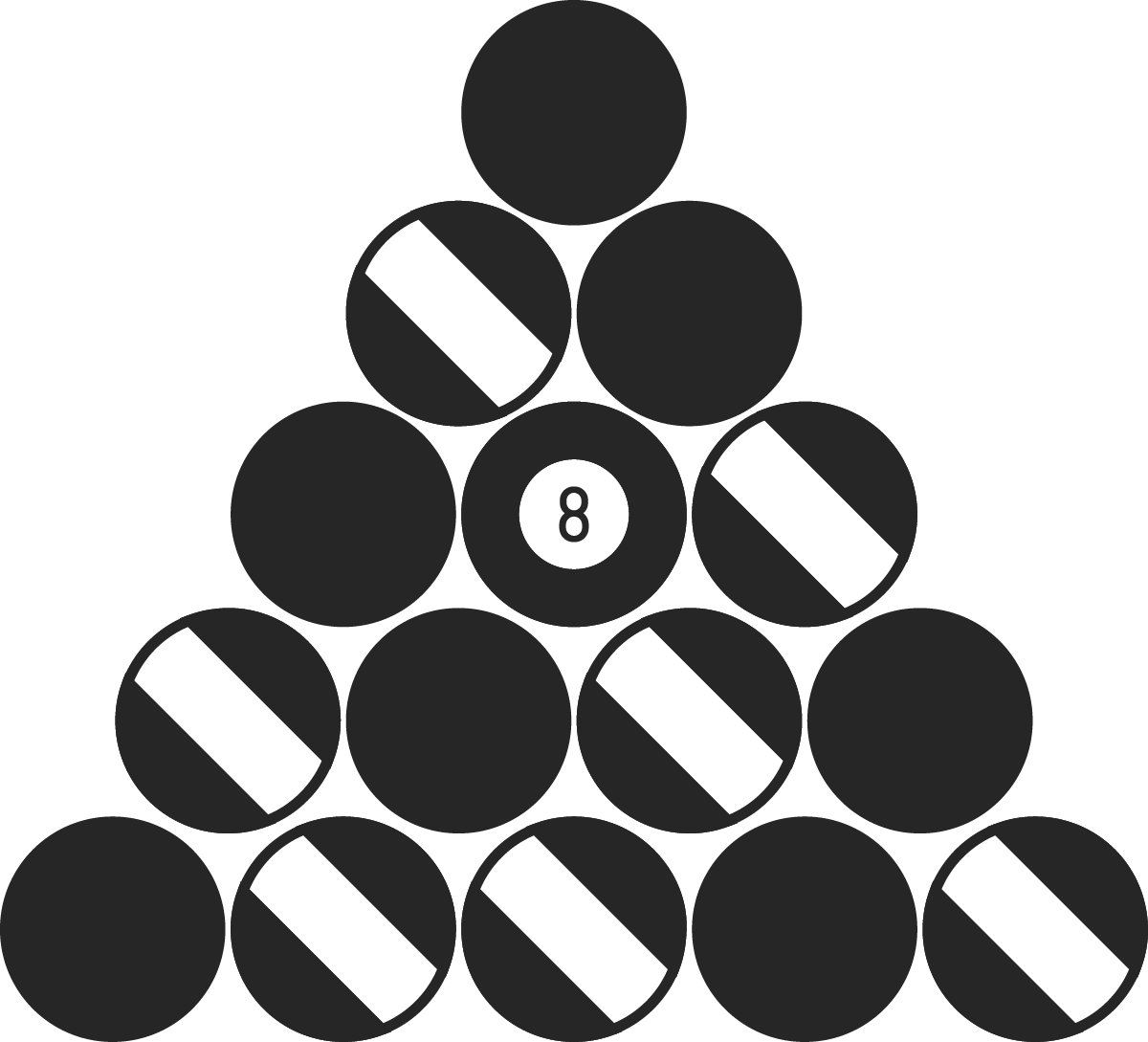 First, the robot randomly corrals all of the balls into the wooden triangle. From there, the robot can either swap the location of two balls or rotate the entire rack 120 degrees in either direction. The robot continues performing these operations until the balls’ formation matches the template, and it always uses the fewest number of operations possible to do so.

Extra credit: What is the maximum number of operations the robot would perform using any template? Which template and starting position would yield this?

One way to think about this problem is as a graph. Imagine each vertex of the graph corresponds to a different arrangement of the pool balls, and we add an edge connecting two different arrangements if it’s possible to transition from one to the other in one move (either with a swap or a rotation). Then, the problem becomes: “which vertex in the graph is farthest in path-length from the target vertex?”. When two vertices are connected by an edge, we’ll call them “neighbors”. Note that the edges in this graph are bi-directional because all the moves are reversible.

Our general approach will be to label each vertex with a whole number that corresponds to the smallest number of moves required to reach the target vertex. In effect, we are computing what is called the graph eccentricity of the target vertex.

Here is a greedy approach that achieves the desired labeling.

Now that all vertices have been labeled, the vertices with maximal label correspond to those that require the most moves to be reached. In order to reconstruct the path back to the target vertex, we go in reverse order:

And it’s as simple as that! Note that we must do the second sequence in reverse. If we try to start from the target and work our way towards one of maximum-label vertices, there is no guarantee that we’ll be able to pick a valid max-length path because some paths will end in dead ends (they will not be max-length). When we work in reverse, however, all paths with decreasing labels must find their way back to the target because of how the labeling was constructed.

The approach I described above is a variant of

I coded up the procedure above and here is what I found:

So in fact, there are 140 different vertices that are max-length away from the target vertex. We can convert the frequencies listed above into probabilities by dividing by 51480, the total number of vertices. Then, this becomes a probability distribution. Computing its expected value, we obtain $\frac{51697}{12870}\approx 4.017$. So it takes about 4 moves on average to reach the target arrangement assuming we start from a position (vertex) that is chosen uniformly at random. Here is a plot of the distribution:

And finally, here is a plot of a possible sequence of moves that takes you to the target vertex from one of the 140 worst-case starting vertices.

If we look for the “longest shortest path” between any two vertices in the graph, then we are computing what is known as the diameter of the graph. This is much more difficult to compute than the eccentricity of a particular vertex, because it involves computing the eccentricities of all vertices! Crunching the numbers took a little over an hour, and the answer is… 8. Below I show an example of a worst-case path of length 8.

In hindsight, it’s clear that the diameter can’t be any larger than 8. To see why, it suffices to show that we can get from any position to any other position in 8 moves or fewer. Here is how you do it. First, swap the eight-ball to move it to its correct location. This takes at most one move. Now, consider the remaining seven solids and seven stripes. In the worst case, all of them are out of place. So it will take at most seven additional swaps to fix it, which makes 8 total moves.

Note that in this argument, I didn’t make use of any rotations! This implies that we can always get from one configuration to another in 8 moves without using rotations. So if the shortest path between two configurations has length 8, then there also exists a shortest path that doesn’t use rotations. In the 8-length solution above, I chose the one that doesn’t have any rotations. Rotations are important in other cases, however. For example, in the original problem of achieving the eight-ball configuration, if we disallow rotations, the solution will have length 8 rather than 6.