This interesting twist on the game of Beer Pong appeared on the Riddler blog. Here it goes:

The balls are numbered 1 through N. There is also a group of N cups, labeled 1 through N, each of which can hold an unlimited number of ping-pong balls. The game is played in rounds. A round is composed of two phases: throwing and pruning.

During the throwing phase, the player takes balls randomly, one at a time, from the infinite supply and tosses them at the cups. The throwing phase is over when every cup contains at least one ping-pong ball. Next comes the pruning phase. During this phase the player goes through all the balls in each cup and removes any ball whose number does not match the containing cup. Every ball drawn has a uniformly random number, every ball lands in a uniformly random cup, and every throw lands in some cup. The game is over when, after a round is completed, there are no empty cups.

We’ll address the second question first: How many balls would you expect to need to draw and throw to finish the game? For this question, the rounds don’t matter at all. The game will end once there is at least one correct ball in each cup, and the pruning phase at the end of each round only removes incorrect balls so we can effectively neglect it.

Each time a ball is thrown, there is a $1/N$ chance it will land in the correct cup. This is a classical coupon collector problem (see my write-up on the card collection completion problem for more background). The solution rests on the fact that if some trial is successful with probability $p$, then we must perform $1/p$ trials on average before we obtain our first success. The probability of landing our first correct ball is $1/N$ so it will take an average of $N$ tosses to do so. The probability of landing our next new correct ball (in a different cup) is $\tfrac{1}{N}\cdot \tfrac{N-1}{N}$. This takes on average $\tfrac{N^2}{N-1}$ more tosses. Continuing in this fashion and summing up all of the intervals until each cup is filled, the total expected number of tosses is:

Now let’s turn our attention to the first question: How many rounds would you expect to play to finish this game? This is a much more complicated question, so to illustrate the approach I’ll solve it for the case $N=3$. We’ll begin by breaking each round into a number of stages, which track the progress of cups as they are filled. In the diagram below, each cup is either empty (no ball), is red (incorrect ball), or is green (correct ball). We can also figure out all the transition probabilities and write them on the arrows. 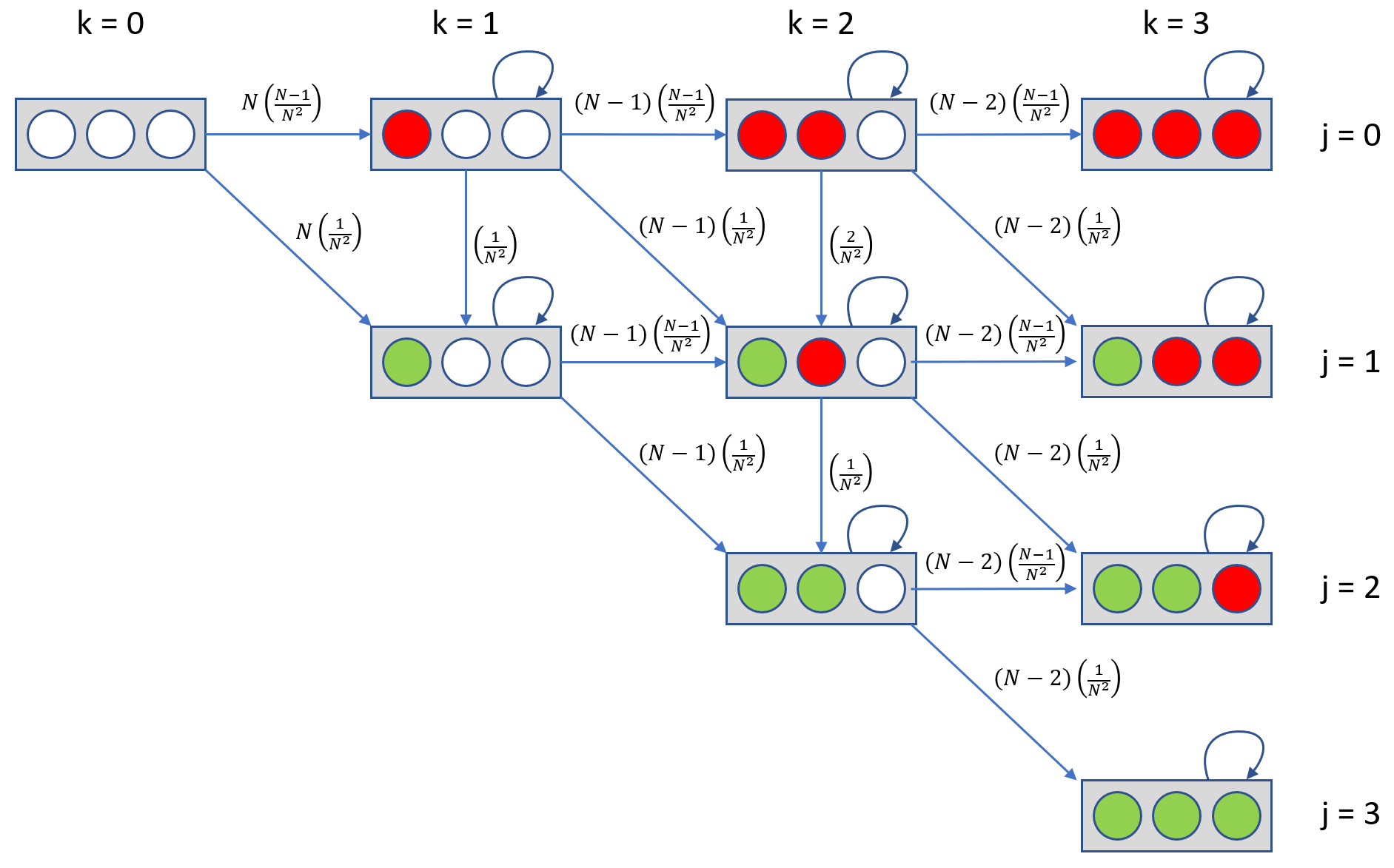 I also overlayed a result obtained via Monte-Carlo simulation using $1000$ simulated games. This shows that the analytical results agree well with simulation. Here are further numerical results, this time extended up to $N=100$: